I Never Thought I'd Say: "No, I'm Not Matthew McConaughey" 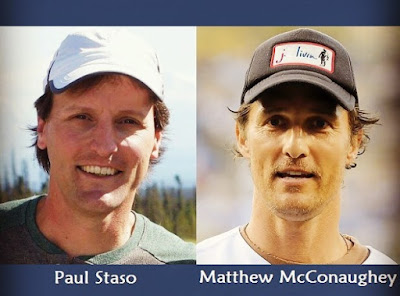 Today, I thought I'd share with you a story from a time when I was mistaken for a well known actor while my wife and I were in a small-town grocery store. At the time, I was wearing jeans, t-shirt and a cap when a man approached me and asked if I was Matthew McConaughey. I told him that I wasn't, and he said that I look so much like him. This is not the first time the topic of the likeness between McConaughey and I had come up. I had to do a little comparison looking for myself.

McConaughey is 50 years of age and I'm 55. You can look at our pictures I've posted here and be the judge on whether there is a close resemblance. There may be a few similarities, but I certainly don't have his net worth of $120 million! He can command $15-20 million for a major motion picture film role today. That's a big jump from the $48,500 he earned from 1994's Angels in the Outfield. The only similarities between his life and mine are that we're both Christians; we both have two older brothers; running has been a part of our lives; and, we both started foundations dedicated to helping kids lead active lives and make healthy choices.