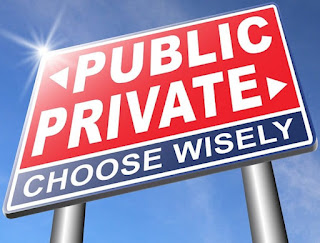 I consider myself a rather private person. While I was running solo across states and countries from 2006 through 2011, my privacy was considerably lessened as I put myself out on paved highways and the Internet highway with greater frequency to share the running adventures I was undertaking. However, now that I am in my mid-50's I prefer to lead a much more private life out of the spotlight -- spending most of my time with my family when I am not at the office.

There is quite an overlap with the people who follow my social media accounts, most being family and close friends -- and only a few being in the acquaintance category. Suffice it to say, the total number of individuals who can access my social media content actually adds up to about 50 people. Yes, that's the grand total of my actual social media "friends" and "followers."

Most of my children have hundreds of followers on their social media accounts. That seems to be the case with several of the people who follow my social media. One pastor that follows me has nearly 5,000 Facebook friends! There's even a man in my church who is nearing 90 years of age with almost four times the number of Facebook friends than I have. Simply stated, I'm a rather private person -- regardless of what people can see through my website at theUSArunner.com, my YouTube Channel, my Google photo albums, or this blog.

I know that you're probably thinking that a person who writes between 100 to 200 blog posts per year can't possibly be that "private." However, the posts that I make are about matters that I don't mind placing into the public eye. I choose topics wisely and am selective about what information I share. I wrote my first blog post in September 2005, nearly fifteen years ago. About five years ago I chose to remove my blog writings from the Internet and on June 23, 2016 I started this blog -- which primarily focuses on topics related to family, faith and fitness. I hope you'll come back again to read what I have to share.